When I was around 9, my parents and I took a two week road trip to visit my Uncle and see Niagara Falls. I remember sleeping a lot, as I was wont to do during long road trips. I remember eating a pint of blueberries in the back seat, a kitten that I met at a campground that I begged to take home with me, the roaring sound of the water as it rushed off the edge of the world, and various other things.

Fast forward to 2005-ish, I was stuck in a horrible marriage and looking for an escape. One way that escape took shape was in a brief but somewhat intense love affair. We can debate the morality of my decisions until the end of time, but I was smitten and felt wanted and truly loved for the first time in a long time. Maybe it was the feeling of just being wanted, since it was obvious my then husband didn’t feel that way. Maybe it was the shine that all new relationships have. Whatever the reason, for my birthday I set off on a cross country road trip to see him on the east coast and I drove via Canada.

I wanted to see the falls again. To view them through the eyes of a woman instead of the eyes of a child. Many things had changed and some things still remained the same.

I still ate a fresh pint of blueberries as I drove, constantly having to remind myself to remember it’s kilometers not miles in Canada and 60 isn’t the same. The sound of the falls were no less strong and imposing and the song they sang as they fell to the bottom was still a sweet melody to me.

Most of all, I wanted to drive roads I had never driven before.

That is one of the things I love about driving and always have. I know I’m no explorer setting off to uncharted lands to discover something new, but in this instance I don’t need to be. New to me is good enough for me.

Now that I drive for a living, going somewhere new makes me giddy. That’s why, when I talked to my fleet manager a few weeks ago about going to Canada, I was beside myself when he said he’d put me on the list.

After my brief stop in Tulsa to see friends and family for some much needed R & R, I set off with a new perspective, a little less tense thanks to a lovely massage, and a little more stylish with new nails, shoes, and a new piercing (Yay more holes in my head!)

Yes I’m wearing one pair of glasses over another. Shoosh, you.

First stop? Pennsylvania. Le sigh… Look, I’ve got nothing against PA but I’ve been all over that state the last couple of months and I’m kinda over it. Next stop was in Indiana and when I was dispatched back to PA I sent the following message.

So instead of heading to PA, I set off for Michigan. Once I delivered my load I spent two days shuttling blueberries around Michigan. These were super easy, high paying loads. You really gotta love summer time in this industry.

After that, I picked up a load of Eggo Waffles and headed towards Calgary, Alberta by way of North Dakota. Not only was I going to Canada, I was going to be driving roads I’ve never been on and see a part of the world as yet undiscovered by myself.

When you drive across the boarder in a car it’s no big deal. When you drive over with a commercial vehicle it’s a bit more complicated. We have two lovely women who dedicate their days to boarder crossings, both North and South. I had to have a 30 minute conversation with them about what to do, what not to do, and general information I needed to make this crossing easy peasy mac and cheesy.

First off, I had a specific time for my boarder crossing. I can arrive up to 8 hours after that time, but if I missed that window I would need to be rescheduled. Due to traffic and my drive clocks I ended up rescheduling twice.

One of the things the boarder crossing women tell you is when you roll up to the crossing too turn your truck off, but don’t set your brakes. Whenever a driver sets their brakes a big whooshing noise can be heard. If you’re in a close proximity to the truck it can be quite loud. As I rolled up to the crossing booth I came across my first problem, there was no one there. Would someone be coming out? Should I set my brakes and go in? ZOMG what do I do?

As I looked over I saw the officer inside waving me in. I set my brakes and headed inside.

Another thing the crossing ladies told me was to just answer what questions are posed to me and not to add anything else or talk too much or seem nervous at all.

Ok my lovelies, many of you have met me in person. For those of you who haven’t, let me say that not being me is a really hard thing to do. I don’t like to talk to new people…I LOVE IT! I especially love making people who don’t laugh often (especially law officers) crack a smile or two and maybe chuckle. Add to that what normally happens when someone tells me to do something and, well yeah, I was cracking jokes and just generally being myself. It was cool, they were well received and in less than 5 minutes overall, I was across the boarder. 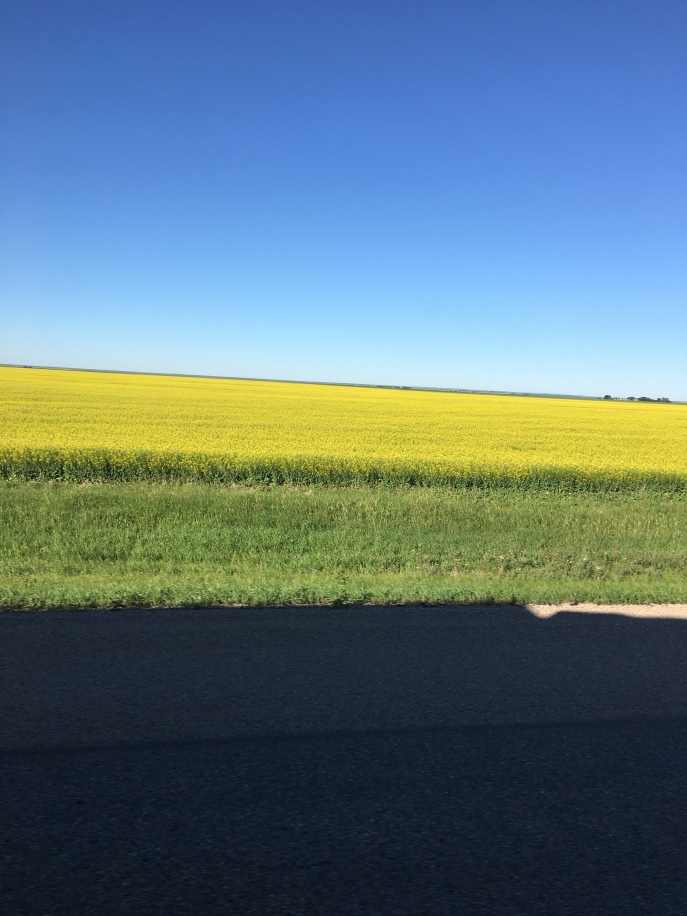 For the first 20 or so miles this is all I saw. The traffic was pretty much non-existent, and I was absolutely in love. First stop, I needed to get the much heard of Ketchup Chips.

Ok, I’m not a ketchup fan. I”m actually not a tomato based anything fan (except for the amazing green curry Bloody Mary at Bird and Bottle in Tulsa, OK and a review of that will be up shortly), but I kinda loved these (even if they gave be a bit of indigestion because in reality they are crap.)

After I made my way though Saskatchewan and Alberta and delivered my load, I found I had a day to myself. I decided I needed a hat (or 5 as it turns out).

Hey, there is a reason this blog is called girl hat zilla…

While in Calgary, and with my downtime I decided to hit a place called Pr0/0f and ZOMG! The food, the drinks, the bartender. As stated above, I love to talk to people and I hear I’m pretty good at it, so when I sit down at the bar and hear an Australian accent in Calgary I have to know more.

<picture not inserted because permission not obtained>

My bartender (whose name I have shamefully forgotten) is a snowboarder from Australia who moved to Canada to do what he loves because, well, snow is not really native to Australia. Kinda like being a Jamaican Bobsled Team. He was awesome and we talked gins, liquors, and favorite drinks.

I sat and watched him mix drink after drink for the patrons while I listened and just observed.

There was a certain beauty to all of his creations. 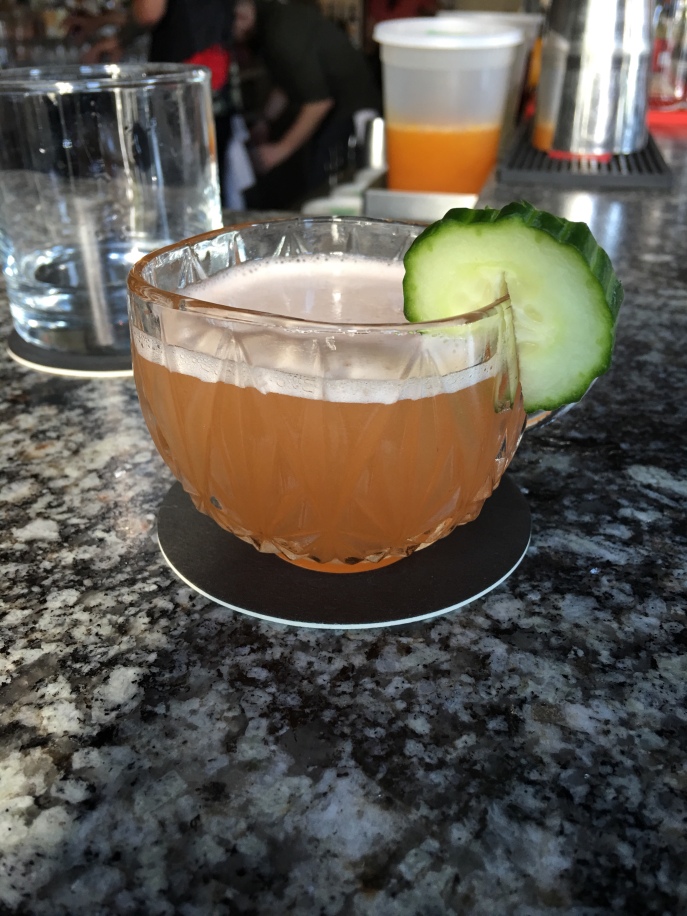 Their pork belly buns were an amazing small plate to accompany any of the drinks.

The Tartar (not pictured because I forgot and it was half gone before I remembered) was a tiny happy explosion in my mouth.

It was on this trip that I decided that along with my travel stories that I would also be featuring restaurants, like Pr0/0f, that I find on the road.

My trip back to the States took me through Banff National Forest and OMG!!! It is now my second favorite drive ever and first best drive in a truck (traveling North on the Pacific Coast Highway is my #1 drive of all time). 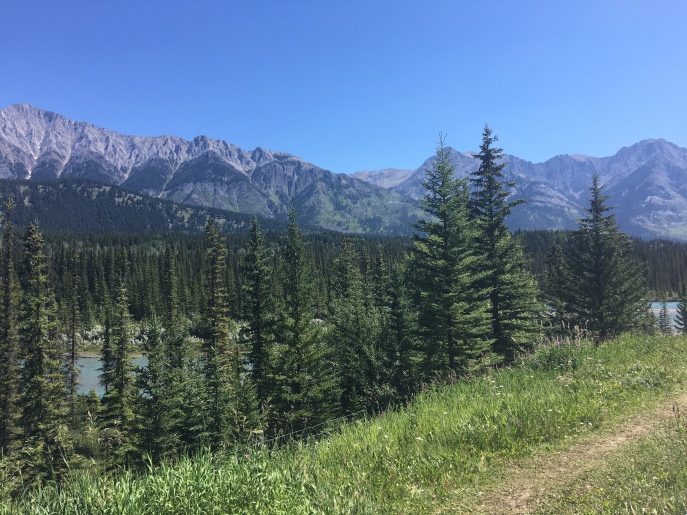 So, I have now crossed the Rocky Mountains in two countries!

After Banff I was taking a break in the Okanagan Valley when I saw a flash out of the corner of my eye. Looking around I tried to find the source of the light, when I heard the slowly accompanying thunder tell me what it was a I saw. As I looked at the clouds overhead, I saw another flash, and then another. Lightning was striking the trees in the mountains overhead. Curious, I wondered “Is that going to start a fire?” Within moments I had my answer.

After Canada, I was routed down to Eastern Washington to pick up apples to take to Virginia. In my next post I’ll talk about Rogue and the amazing food of @chef_johnny.

Oftentimes, when you open your trailer after days on the road you get a whiff of staleness or, in the case of meat loads, just the overwhelming smell of meat. That load, upon opening the doors, just smelled like apples and it made me smile. To date it is the second best smelling load I’ve ever had. The first was when I took 40,000 lbs of cocoa powder from PA to GA. That one made me want to take a nap in the trailer.

As of Wednesday I’m headed back to Calgary, and now that the shine of new has worn off I’ll try to get more pictures and info.

One thought on “Oh, Canada…”