As I sit here on my delayed flight, wondering if my travel mates will make it out of the states at all, I’m filled with this sense of peace. I cant really explain why it is, but I feel as if I’m supposed to go on this trip. I’m not a big believer of destiny or fate (because if I did I’d have to have a long conversation about a few key things, including the two marriages to horrible people) but for whatever reason, this trip is different.

My day so far has been a series of starts and stops. The day before travel, saw Tampa covered with sputtering rain. It started, it stopped, and it wasn’t consistent at all. This morning however was all about downpours.

My flight was delayed about a hour and a half. I thought about going to the airport and waiting, but since Tampa is rarely busy and I was only 5 minutes away, I decided to just wait it out. That was the first mistake I made. When we finally reached the airport traffic was horrendously backed up. Even Travis was surprised and stated “in the 20 years I’ve lived here and as many times as I’ve flown into/out of this airport, I’ve never seen it this busy.”

TSA was…ugh. I’ve decided to apply for global entry as it also includes pre-check so I can bypass the regular line. If I’m going to be traveling more often it only makes sense and well I’m sick of taking off my shoes.

After I got through the line I had just enough time to get to my gate before they started boarding. Since I splurged on this flight, my Tampa to Newark flight was first class.

Once seated the flight progressed as all flights do, but with good food and room to move.

After landing in Newark, I had a 3 hour layover between flights so I headed over to the Polaris Lounge. Talk about swanky…

This wasn’t your average buffet.

Free food and drinks and plenty of seating and charging stations made this an extremely comfortable place to wait for my next flight. 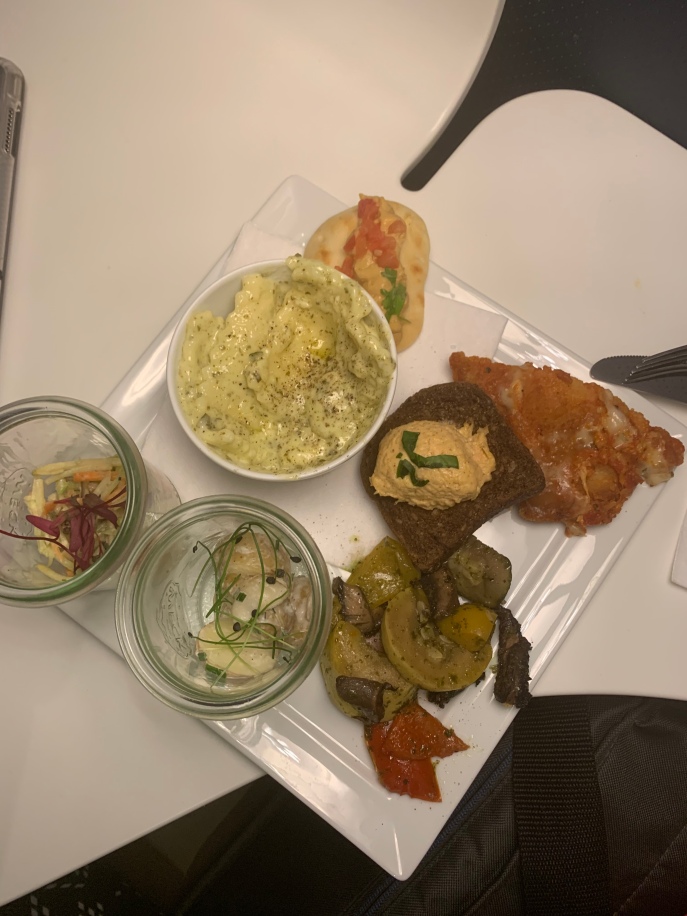 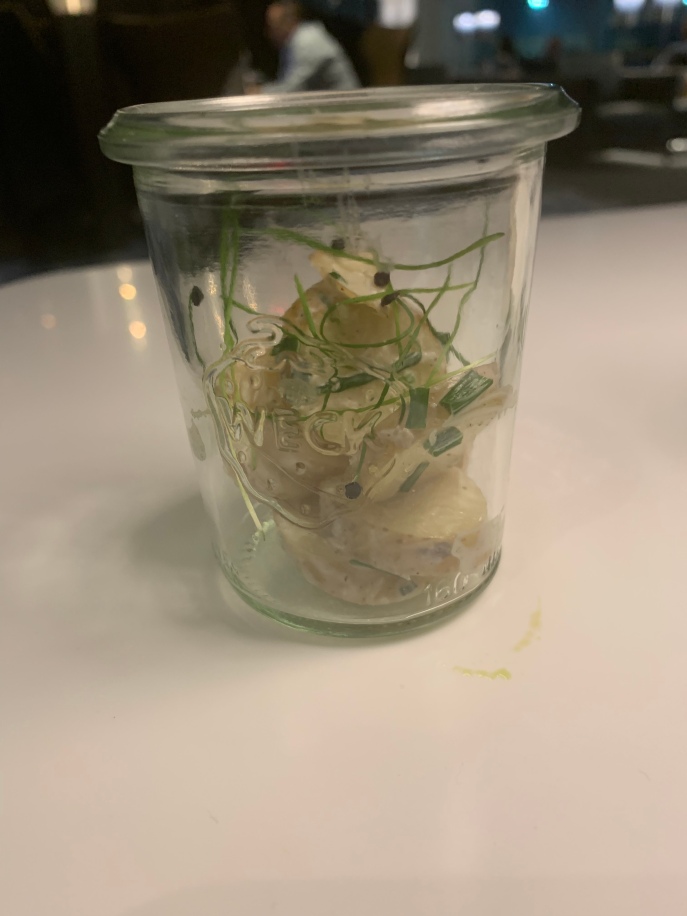 I really loved all of the food with the exception of the two salads. I felt they were not dressed enough so the flavors were lost.

Soon enough it was time to head to my gate, which was conveniently located just outside of the lounge. After boarding I was greeted with this. 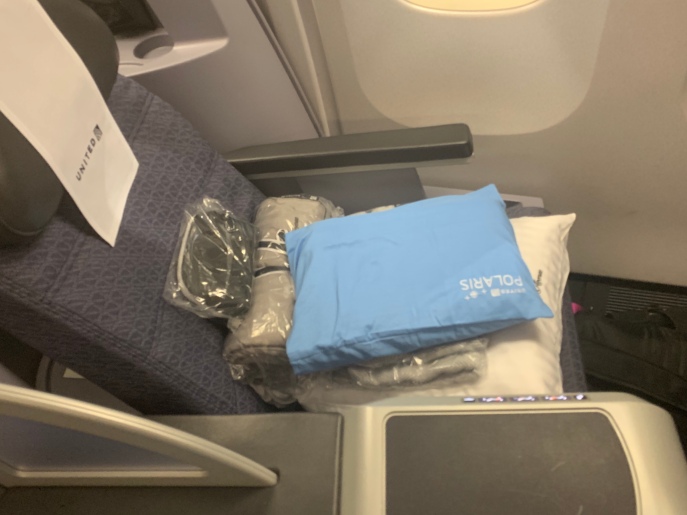 Everything I needed to be sung as a bug in a rug was located on this seat. In the small black bag, I found the silly thing that made me a happy camper.

THE SMALLEST TUBE OF TOOTHPASTE EVER!!!!! Sure we can have a discussion about the fact there is more plastic than product here, but can we not? Look it it! It’s the most adorable thing ever!

I also had a very large screen with plenty of movies and tv shows to choose from or a flight tracker to show me exactly where we were in our trip. 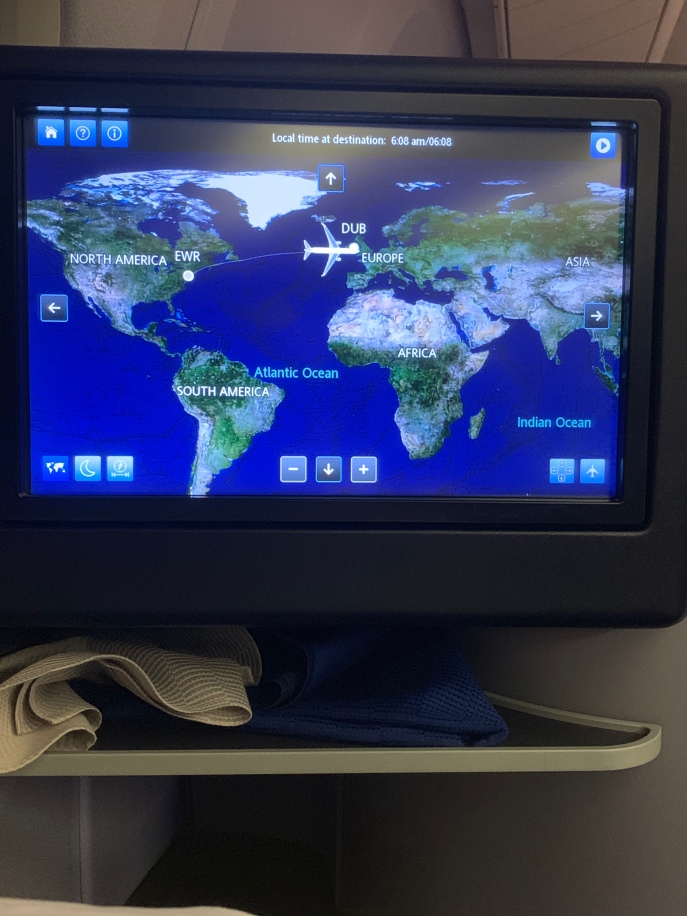 Then there was the food…The starter was a lovely salad with Kale, mesclun, roasted fennel, bell peppers and pomegranate seeds and was served with a pomegranate balsamic vinagrette, smoked duck with a cranberry pumpkin seed farro salad, brined carrot, and stone ground mustard. 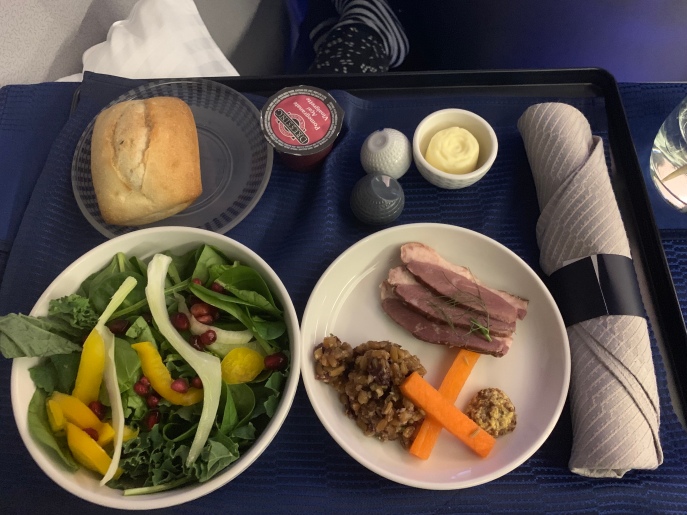 For the main it braised short rib with Carolina stone ground grits and braised Bok Choi. 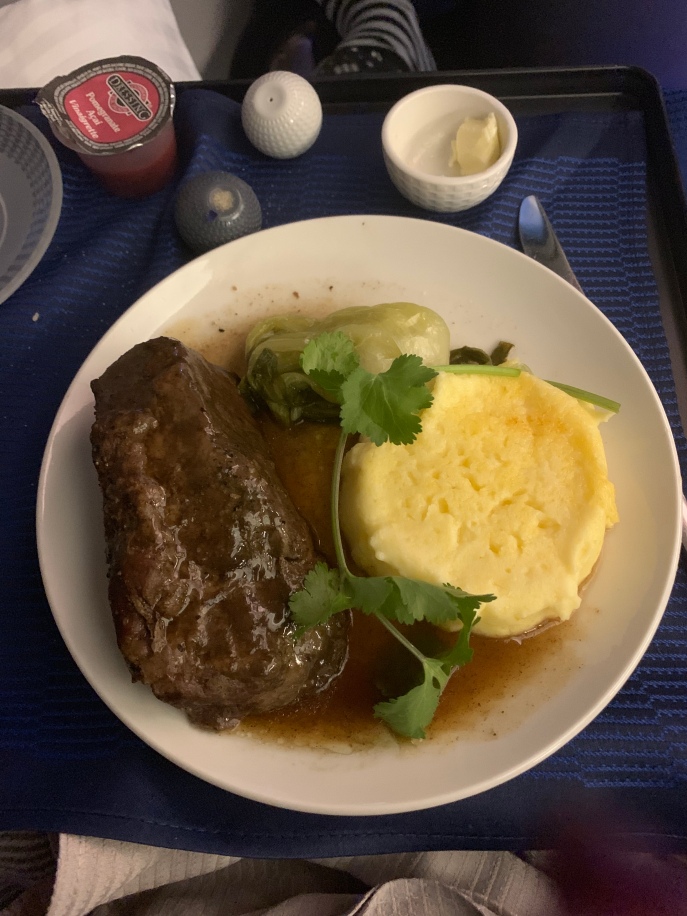 There was a dessert offering but I was way too full and a bit sleepy so I reclined my seats to the full bed mode and snuggled in. I felt that I had only been asleep for a few minutes, but it turned out to be hours as we were about an hour from Dublin and I was being woken up to ask what I wanted for breakfast. Considering I hadn’t finished all the food I was served previously, and I still felt full I passed on breakfast.

At 7am the sun was still down so I wasn’t able to see much as we came in for a landing. Once on the ground I was amazed at how quite the airport was. Like, there was NO ONE around. I grabbed my bags, hopped a taxi, and headed to check in.

Once at the hotel, there was a bit of confusion at check in. I was told that all of the reservations were in one of my travel mates name but the hotel said they had no reservations for him. Feeling a bit panicky and probably looking as much, the lovely girl asked what my name was and said the reservation was under my name. Confused but happy that I would be able to take a shower very soon, I finished my check in process, and headed up to my room.

Once in my room I checked my phone to check in with my family and saw that I had a missed call from my travel mates and a message asking me to call them.

When I called I found out that my entire vacation was changing. They had missed their connecting flight and due to storms in Florida and high holiday traffic they weren’t able to get out of the states until sometime later in the week, so in short they weren’t coming.

They had contacted everywhere we are staying and transferred all of the reservations to my name, but for all intents and purposes I’m on my own.

Next up, Dublin and driving on the wrong side of the road.