Let’s see, in this edition of where is Tj…I was taking a bit of a break down in Louisiana about 120 miles north of New Orleans but now I’m back on the road. I had considered renting a car and driving down to Nawlins and doing a restaurant review (since I haven’t done one of those in a while) or just walking around the city, but I found myself in a weird place and contemplative and not feeling up to exploring alone.

As I’ve written about before, the miles I drive are a church of sorts. It’s a way for me to safely take out all the hurt bits I carry around with me and look at them objectively and in some cases, let them go. This is what driving has always been for me. A safe place to let down my guard and not be fierce and at the ready all the time.

Watching the miles go by has a way of centering me that nothing else, besides being near the ocean, can do.

Unfortunately that hasn’t been working for me of late. My mind, usually calmed by the road, is more agitated than usual. Part of it is on high alert waiting for the next blow that will rock me off my feet and pull the rug out from under me. Part of it is dizzy with anticipation and feelings of excitement. These two sides are warring for dominance while neither gives an inch. I’m finding it harder to rest and even harder to stay centered. I’m naturally a pessimistic person because I’d rather be pleasantly surprised rather than let down, but dammit that naysaying bitch isn’t getting the upper hand this time.

Look, here’s the deal. I’m a social butterfly. If you’ve met me you know how easy it is to fall into a friendship with me. I fully embrace people at first glance and have told more than one of you that you’re probably going to have to get a restraining order against me if you want to stop being friends (by the way, I wasn’t joking). When you grow up without family, you tend to find your tribe as you go through life. My tribe is vast and far but no matter the distance the connection will always be there.

A chance meeting at a bar where a young woman sat alone and I decided she needed company, we quickly became fast friends. Co-workers who kept me sane while a crazy boss took out their insecurities on me. A guy who asks for directions and instead gets a life long friend. Each and every member of my tribe is special and unique and I love them all fiercely.

While making friends is second nature to me, one thing I don’t do is let anyone in fully. There are people who have known me for more than 30 years who would swear they know me and know everything about me but don’t really have a clue to what I hold inside. Some bits are too ugly and harsh and don’t need to be shared. Some have been slowly coming out to a select few. Some, well only one person has ever made me feel safe enough to bear it all, and that’s the crux of my current dilemma. Feeling safe isn’t something I’m used to so it’s thrown my brain into a tizzy and makes me want to bolt for the hills at times. I’ve had a few of those moments over the last few weeks. When you stop letting yourself feel for years and all of a sudden you’re awash with emotion it can be a bit jarring.

Anyway…what does that have to do with driving? Nothing I just needed to get that off my chest. Ok, back to the driving gig.

After my Calgary load, I picked up apples in Washington and headed towards Florida. For three days I was driving in heavy fog, so much so that it put me a bit behind schedule. That’s because I had a huge storm bearing down on me from behind. 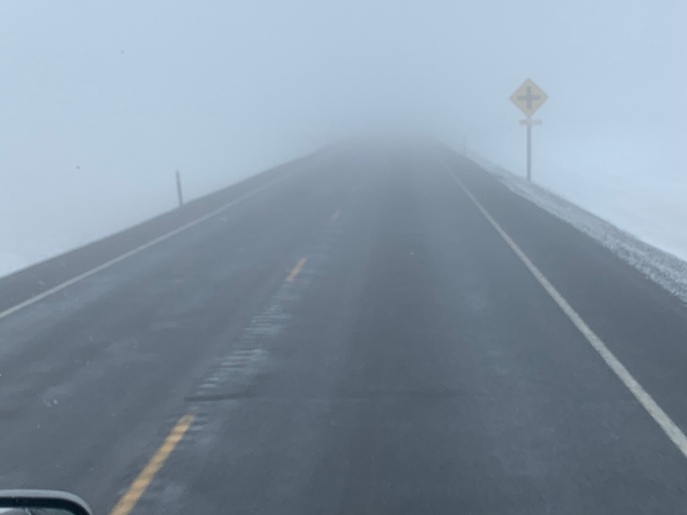 Once I dropped down from the north into the south the danger of snow was passed and I was driving in rain for two days. Rain isn’t as scary as snow and ice, but it can still have its dangers,. Especially when people forget that slowing down is in their best interest.

This job has taught me a lot about patience. Sure, I still get frustrated with drivers from time to time, but usually my frustration comes because a car is putting me and my livelihood in jeopardy with their antics and unsafe driving. I get it, I used to be that driver, but now I fully understand the folly and just how much danger they and I are in when someone cuts me off or decides to exit in front of me by blowing across three lanes of traffic to make the exit. On that note, if you do this, please stop. You cant always see what’s coming up beside a trucker. Also, just go to the next exit an turn around. It’s safer for everyone.

While driving on Interstate 26 on my way to 75 and through Atlanta I saw a total of 14 accidents due to people forgetting that roads are slippery when wet. Obviously none of them are Bon Jovi fans.

Yeah, I should probably apologize for that one but I’m not going to so lets just move on.

Once in Florida I made my delivery and had planned to take a break but took a load to Louisiana instead. I was fully enjoying the sunshine while my buddy Jay was dealing with this. 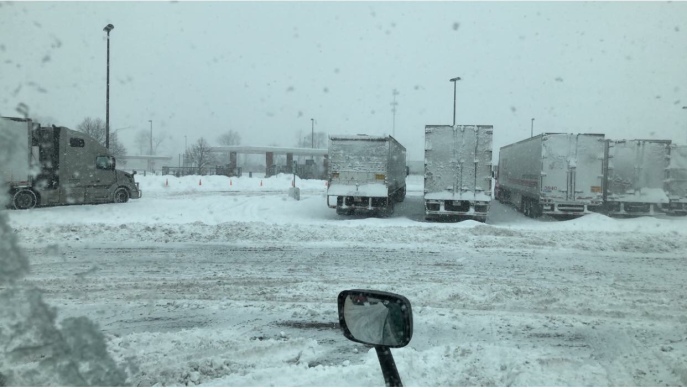 Of course I may have rubbed it in that I was in a t-shirt and skirt and sitting outside. I may have even complained about there being too much sun to Jaz as we spoke on the phone while it was cold and rainy in Ireland. Was I being a bit of a shit? Yeah, I kinda was. Was I going to regret it? Sure ’nuff.

I had planned on taking a 34 hour break in Louisiana but instead was told that there was a load for me heading back to Calgary at the end of next week. I quickly ran some errands to get my nails redone and some groceries.

Ok, girl time now.. I’ve been doing acrylic nails for about a year now and I love them but I wanted to try dip nails and zomg I love them even more. Please excuse my dry cuticles. They aren’t as thick as acrylics but just as strong. Let’s see how they last the next couple of weeks. 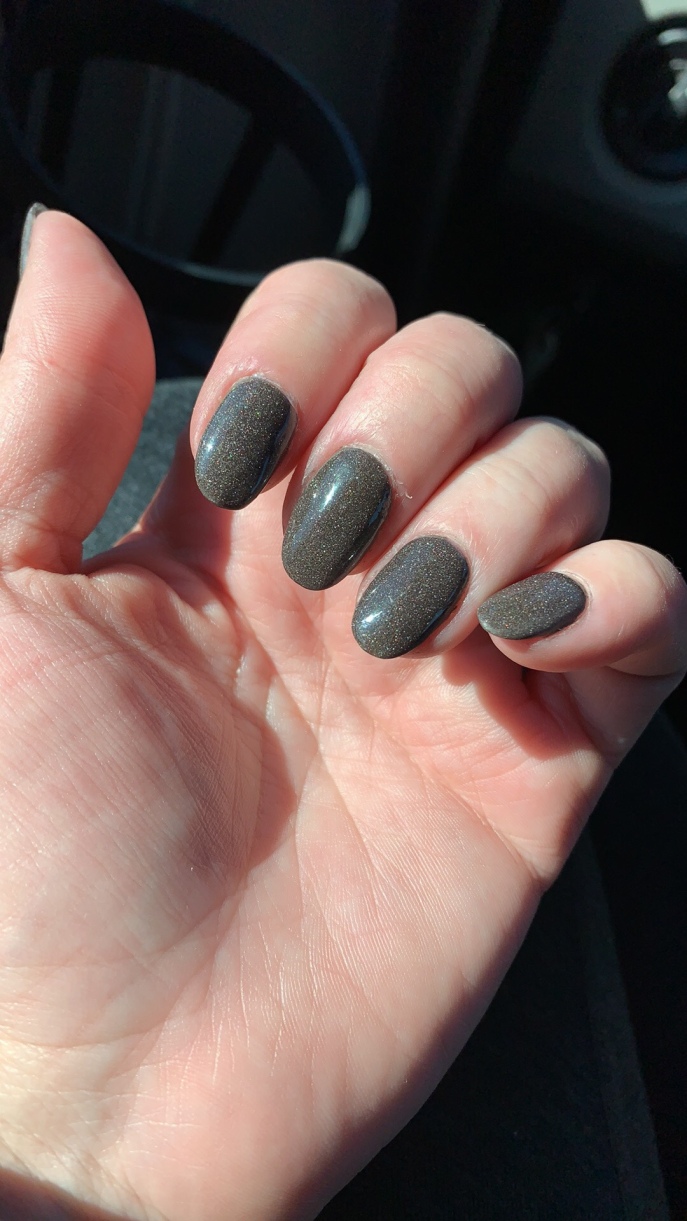 I’m currently heading to Denver where I will take a small break to celebrate my daughter graduating from massage school (Yay Morgan!) and do a bit of laundry to get my heavy winter clothes all ready for what’s next.

As I looked at Facebook and saw a post by my bestie, my blood may have run a bit cold.

This is what I’m getting ready to drive into after Denver. -64? I can’t even comprehend temperatures that low and honestly I don’t really want to. I remember how cold -50 was when I lived in Madison and I hoped to never see that again. Well, it just goes to show you that no matter how much you may wish and hope, you can’t always get what you want.

I should be able to survive in my truck but fueling is going to be a nightmare. This is my payback for being a shit. Jay is also laughing all the way to Florida. To be fair, he’s had a rough couple of weeks so I’m happy he’s getting a bit of a reprieve.

Wish me luck because at this point I’m definitely going to need it. 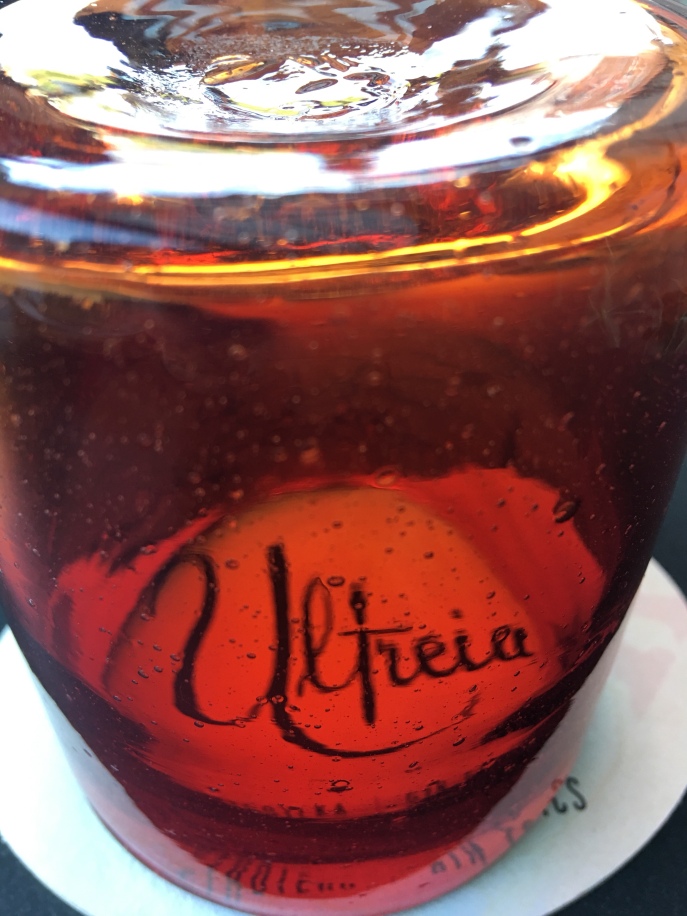 Have I mentioned that I have a recently discovered strong love affair with gin? After going most of my adult life hating the taste and smell all it took was one well mixed Aviation by a good friend and suddenly all I waned to drink was gin. Two years later, it’s pretty much the only thing I will drink with the sudden exception of a good Bloody Mary now and again.

When scoping out restaurants that I wanted to try, I stumbled across Ultreia and when I saw that “gin tonics” proudly listed on their website, I knew this was my next destination.

According to Eater, Ultreia is a Spanish Ham and Gin Bar. Well count me in! 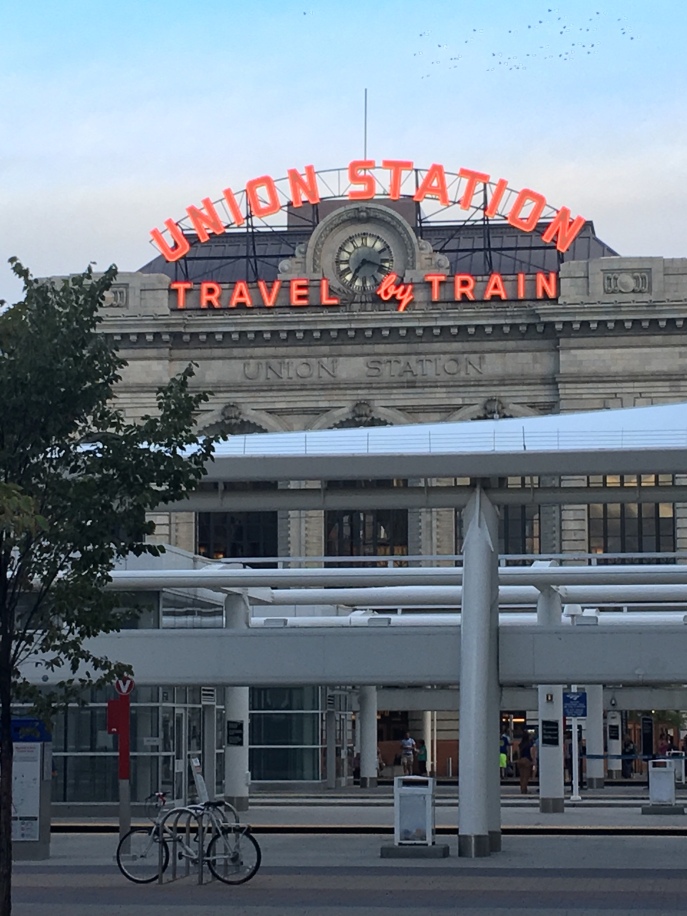 Located inside the Denver Train station, Ultreia seats approximately 50, but with a small patio and a nice night, my companion Nick and I opted to sit outside on the patio. This was a good thing as the night air was much cooler than the stifling and loud interior of the restaurant. It also gave a bit more space between our dining experience and travelers shuffling by. 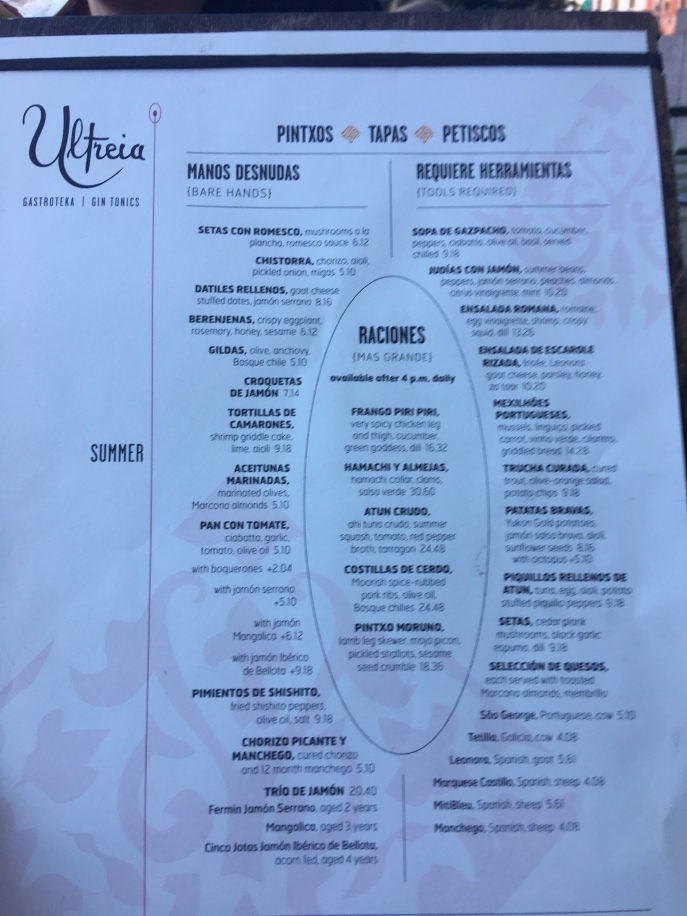 Not bothering to dither over choices, Nick and I both dove in ordering some of our favorites for round one. I decided to start with the Wendy Peffercorn to drink.

I don’t know what I was expecting but I know it wasn’t pink peppercorns floating in my drink. Regardless of that, this was lovely. It did have a slight pepper bite to it but not in a bad way. I did find it a bit on the dry side but all and all it was a lovely drink.

We started with Cod fritters with a garlic aioli and blistered lemon which was the special of the day.

We followed those up with the ham croquettes,

and the goat cheese stuffed dates.

Nick also ordered the cured trout plate (not pictured) and while I did have a sample it wasn’t to my liking.

Another round of drinks and a final share rounded out our night. 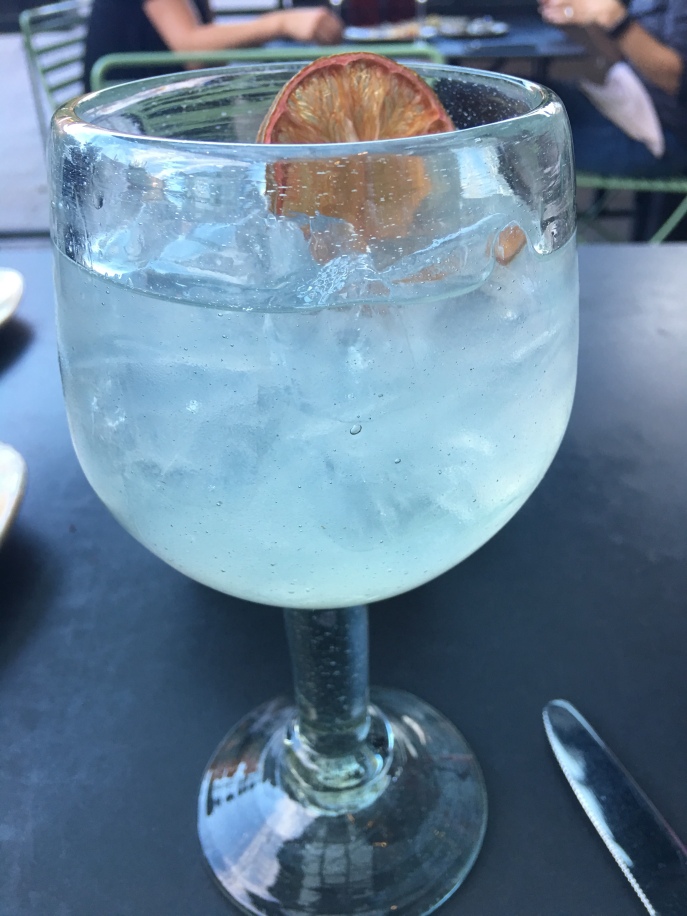 For my second drink, I decided to try the Adventure Land and it was everything I wanted.

Our last share plate were fried shishito peppers and this was the perfect cap on the evening.

While I did enjoy my evening at Ultreia, there were more than one dish that I felt was a bit over done. These included the dates and the cod fritters. The dates were almost too tough to chew and the cod lost all of its lovely creaminess due to being flattened and fried to such a crisp. Maybe that was the intent of the chef, but it seemed to gain all the crunch while losing all the flavor and that makes me wonder if it was really intentional or accidental.

The other thing that made me kinda sad was that I had intended on ordering the chef’s tasting menu since I saw it on both the website and menu. When I inquired about it I found it wasn’t a true tasting menu but rather a standard listing of items currently on the menu and “really isn’t a a thing anymore” according to our server.

If you are in the Denver Union Station area, I would still suggest stopping in and checking out Ultreia. As for if I will stop again… I might give it another try just to have their ham sampler and more G&Ts but I don’t think I would go out of my way.