This is the route we just drove. Othello, Wa to LaSalle, IL to Camden, NJ. The last few days have been a blur of driving and sleeping (or attempting to). Somewhere in Idaho I suspected that I had the beginnings of a sinus infection. By Montana I was pretty certain that’s what was going on.

This is one of those situations I was waiting for. When you’re driving cross country, you don’t have the luxury of just pulling over anywhere. I’m driving a 83′ vehicle that weighs approximately (for the current load) 63000 pounds. Careful route planning at all stages of this game are crucial. I have to watch for low overpasses, weight restrictions of roads and bridges, and just anywhere my long fat butt of a truck just can’t physically go. Turning around, if I get myself in a bind, is easier said than done. One bad move and I could end up in a ditch, or having to call a tow truck to extract me from someplace I shouldn’t be. I don’t really have a AAA option so we’re talking a tow rate of somewhere in the area of $2000. The very worst case scenario is that I roll the truck. Rollovers are deadly for the cargo, your license, and your self.

So, now here I am…swollen face, aching sinuses, and nothing for relief. The guy I’m driving with has nothing on his truck to even heat water in. As I drive along I find myself dreaming of my neti pot back home. I had considered bringing it but space was limited. I consoled myself with daydreams of what I would have on my truck when I was done with this whole training thing and yes, my neti pot was on the list.

As I outfitted my truck in my mind, I suddenly had a brilliant albeit weird idea. You see, I travel with salt. I’m not a fan of regular table salt but I do have Himalayan and sea salt with me. Yes, I know I’m weird. If you’re new to this blog you’re really only scratching the surface of how weird I am.

At my next stop, I purchased a coffee cup filled with hot water, placed what I guessed to be the the proper amount of sea salt for the amount of water, and placed the lid on it. This was to be my poor mans neti pot. Thrilled with my idea, I went into the bathroom and proceeded to test out my new invention.

For the most part, it worked. I had to add a secondary hole to allow the water to flow more freely, but all in all it was a success and my sinuses were already happier with me. I would repeat this at every stop we made the next two days and this effectively helped my sinuses clear out and get to a more healthy state of being.

This trip was also the first time I needed to get fuel. This is how much it costs to fill up just the main tanks with Diesel. This doesn’t include the refer tank (which also runs on diesel and keeps my trailer at a temperature specified by the shipper) nor does it include DEF.

Speaking of DEF…DEF stands for Diesel Exhaust Fluid. “Diesel engines can be run with a lean burn air-to-fuel ratio (overstoichiometric ratio), to ensure the full combustion of soot and to prevent them exhausting unburnt fuel. The excess of air necessarily leads to generation of nitrogen oxides (NOx), which are harmful pollutants, from the nitrogen in the air. Selective catalytic reduction is used to reduce the amount of NOx released into the atmosphere. Diesel exhaust fluid (DEF) from a separate tank is injected into the exhaust pipeline, where the aqueous urea vaporizes and decomposes to form ammonia and carbon dioxide. Within the SCR catalyst, the NOx are catalytically reduced by the ammonia (NH3) into water (H2O) and nitrogen (N2), which are both harmless; and these are then released through the exhaust.

DEF is a 32.5% solution of urea, (NH2)2CO. When it is injected into the hot exhaust gas stream, the water evaporates and the urea thermally decomposes to form ammonia and isocyanic acid:

The isocyanic acid hydrolyses to carbon dioxide and ammonia:

From this point, ammonia, in the presence of oxygen and a catalyst, will reduce nitrogen oxides:

The overall reduction of NOx by urea is:

Above sourced from Wikipedia. This concludes your science lesson for the day.

Some drivers will call DEF bull piss and while it’s gross, it’s also kinda true. I don’t know that’s it’s specifically bull urine but it is a urea compound which is the breakdown of proteins in mammalian urine.

Anywhooooooooo….DEF is expensive as well and necessary for the truck I drive. The 145 gallons of fuel will take a fully loaded truck approximately 1200 miles. 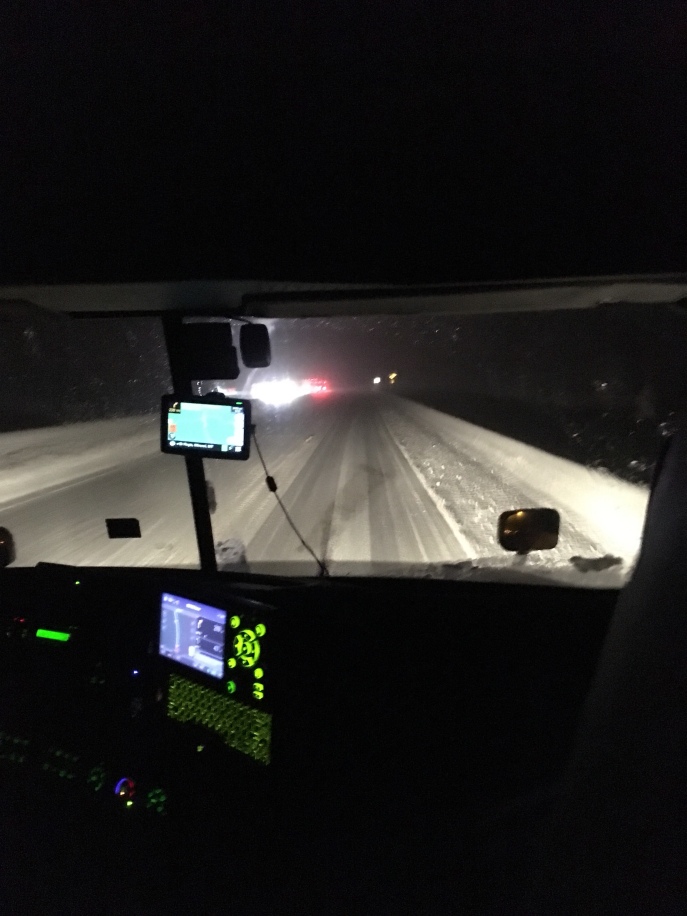 This trip was my first experience driving in snow. Now, since I grew up in the Midwest, I do know a thing or two about driving in winter weather. Now after experiencing it in a fully loaded Semi I’m here to tell you, my lovely readers, that shit sucks. You’d think that the extra weight would give you more traction but you’d be wrong. Not only that, when your trailer starts to slide, your initial reaction is to break, but this can actually increase your slide and make you jackknife. What you have to do in this situation is completely contrary to everything you know and that’s to accelerate to pull your trailer out of it.

I will say, I may have freaked out a bit during this. My poor trainer Adam, who was sound asleep, got woken up but a slightly crazed and frazzled Tj just to have him there for moral support. I will say that while I didn’t cry, I may have felt like crying a bit. It was actually quite scary, but now that I’ve done it I think I’ll be ok next time I hit weather like that. 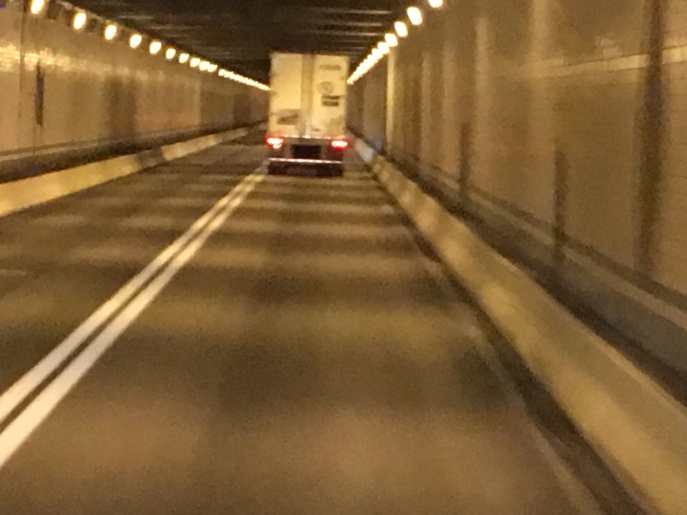 One of the things this trip allowed me to do/see again is the Allegheny Mountains in Pennsylvania. Twenty years ago I moved to New Jersey and drove these roads first in my car and then in a Ryder truck pulling that car. To now drive these in a semi was a whole different experience while still feeling a bit nostalgic. 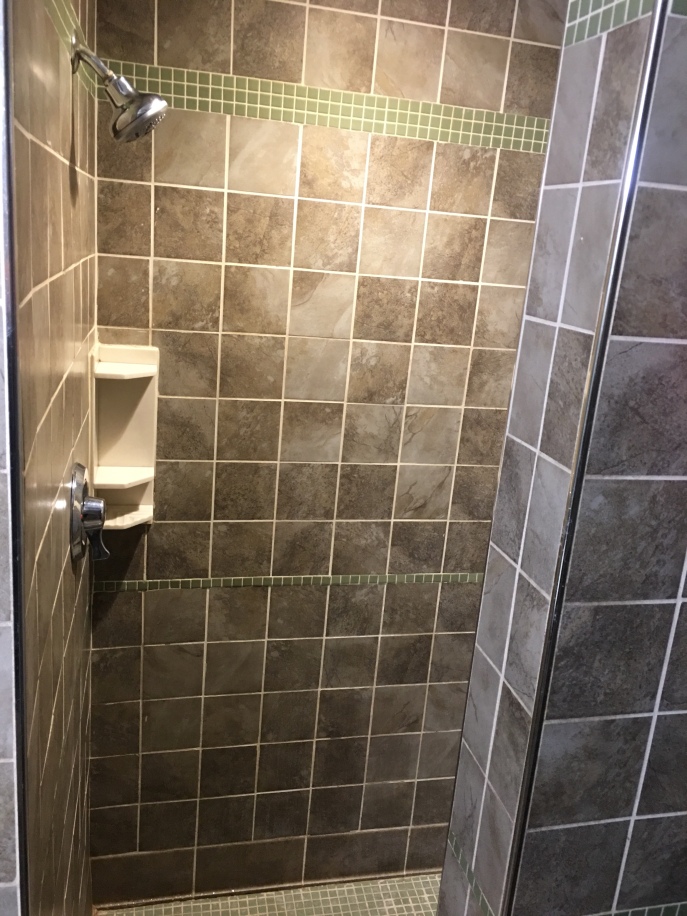 Finally after arriving in New Jersey and delivering our load of onions, it was time to experience another shower. Side note, I had a conversation with my trainer last night letting him know that he was going to need to start scheduling shower breaks more often because I was not comfortable only showering every few days. This job is gross and dirty in the best of times. Showers are a necessity.

This shower had a little more of an institutionalized feel to it. It was still clean and towels and washcloths were provided as well as little hotel soaps and a peppermint. This time, the floor seemed a bit grungy and I mentally added shower shoes to my “must get” list for the next time I hit a store.

I’m now chilling out while waiting to pick up my next load. This one will take me up to New Hampshire which is about 3-4 hours away.

Until next time my lovelies. Let me know if you have any questions or if there’s something you’d like to know in particular.